During a recent review of some archived images I came across a set of photographs I made several years ago of a protest march and counter-protest that took place in Forsyth County, Georgia. I’ll write more about that particular protest in a later article, but I was struck by the similarity between the nature of the protest then, and what we have been seeing with respect to the anti-immigration and anti-islamic tone that has been dominating the media and public discourse of late. The messages on the protest signs followed similar themes then as they do now. My interest in exploring these themes has given rise to this current project, Faces of Protest. The faces of protest are those of individuals who feel strongly enough about a cause to organize, debate online, and travel to protest sites, often at great inconvenience and expense, in order to make their voices heard.

I’m sure some feel strongly about their cause, some somewhat so, while others may just be looking for entertainment. No doubt some attend merely to shake things up, to cause trouble if they can. The leaders have various motivations as well. Some may be looking to build a power base from which to launch a political campaign, while others may be seeking to effect change on a specific issue like their supporters. More often than not, it takes political action to achieve the desired result. Often the protest is in support of many complex issues under one large umbrella, such as with the Tea Party movement. The participants may have a number of hot buttons which the leaders can target by generalizing the cause under some broad heading such as “conservative” or “pro-Constitutional”, or labeling those they envision as their enemies with some broad brush labels such as “liberals”, “fascists”, “racists”, and “socialists” so the entire membership feels a camaraderie against their common enemy. A supporter may individually feel strongly about a single hot button issue such as illegal immigration, while not feeling strongly about another such as healthcare reform. They may go along with the positions about which others feel strongly as long as their issue gets the attention or support they think it deserves.

Although I’m interested in the expression of protest in images, I often wonder what brought on the ontology that gave birth to the expression – what events, education, discussion, and thought brought the individual to the protest. Learning this would require more in-depth discussion with individual participants, something I hope to have the opportunity to do.

I’ll close this first article with an image from my Forsyth County protest coverage which I think is apropos to the current anti-Obama protests which we have seen lately. 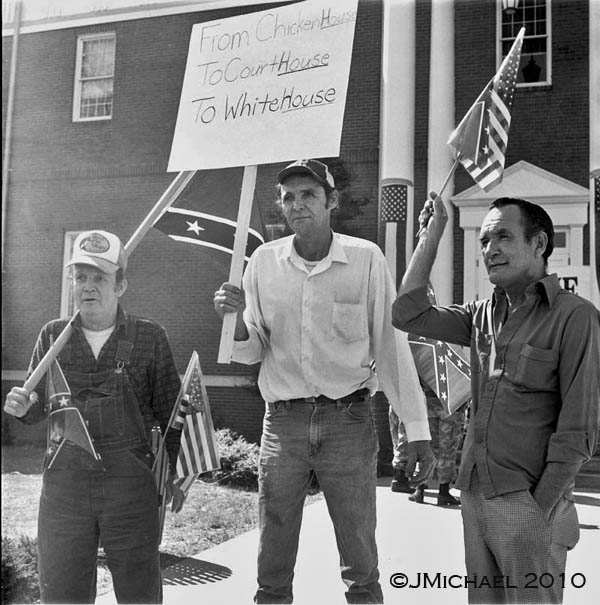 This entry was posted in Civil Rights, Introduction, Politics. Bookmark the permalink.